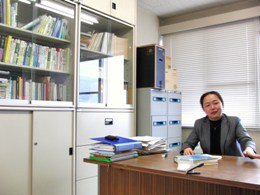 “My research field is probability theory. I have been researching for the last few years on explaining phenomena such as Brownian motion using a mathematical model. In this model, the initial conditions are random, but there is no randomness in the dynamics. I think there have been very few studies along this line. The problem itself has existed for around 30 years; however, it involves many calculations, and thus has not been often considered.

Brownian motion was discovered by a biologist in the 1820s. He noticed that pollen grain fragments move erratically in water and questioned this occurrence. At that time, it was often said that this is because pollen has life; however, in modern times, it is thought that this motion is due to collisions between water molecules that move the pollen grains.

“In the early days of my time in elementary school, quiz programs were popular on TV, and on one such quiz program, the following question was asked. I still remember it well. It was, ‘In a particular family, if the parents continue having children until a child of a particular gender, be it male or female, is born, on average, what will be the relative numbers of boys and girls?’

The answer to this question is ‘the same’, but when the contestant was questioned by the host to explain the reason, the contestant replied, ‘To explain this, you would need to know probability theory, so I won’t’. This was the first time I had ever heard the term probability theory. I was fascinated by the fact that the problem and answer seemed like something everyone could know, but knowledge is needed for the actual calculation. The explanation is difficult, but the answer is simple. Right? The process is not known by everyone, but the answer, which everyone knows, is there.” 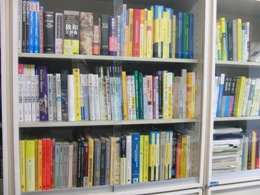 The fun and difficulties of research

“This may not be the best way to express it, but in some sense, research is a source of self-satisfaction. There is struggle, and then you become satisfied or happy. The part with which you really struggle and the part that gives you the most joy are the same. Even if you intuitively know that something will end up a certain way, sometimes it is quite difficult to actually prove this, and that is why you are very happy when you successfully can do so.

Sometimes the struggle lasts one or two months. Now that I have kids, I am pretty much forced to stop working at some point every day. So, even though I often spend a lot of time thinking about a problem, it is typical for me to spend at least a few hours a day not thinking about it [laughs].

It is not always the case that a problem to solve is found naturally. I think this is one of the most difficult things in my research. Fortunately, however, the problem I am thinking about now has many possible versions; so, I will not struggle in that sense, at least not for a while.”

“Even in China, I can remember that not many females studied math—maybe only a few among a class of tens of students. One thing that was interesting though is that among my classmates in university, the ones who went all the way to completing their doctorate and remained at the university, well, almost all were female [laughs]. At the time, male students shouldered various responsibilities, such as earning money for their family. So most graduated from the department and became employed. The female students were the ones who could do what they really wanted to. It is sort of interesting if you think about it.

For me, maybe it is a matter of my personality, but I never gave too much attention to what others thought of me. I thought about what I wanted and how I wanted to be. I think that may be a good way to go about it. This can be said on the scope of an entire lifetime or even looking at a span of only a few years. That sounds like I’m talking big… [smiles].

If someone really wants to be a housewife and to care for her husband and family at home, I don’t think it’s necessary to tell them, ‘you must be come a mathematician,’ and to attempt to force them. However, at the same time, if you really love mathematics, and the only thing stopping you is that there are not many others like you who are around you or that people look at you strangely, I don’t think you should hesitate. You should really go for the thing that you want to do—do what you truly want to do. I think that is real freedom.” 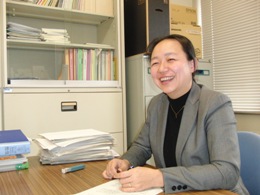